Yorkshire lad parts with his brass! 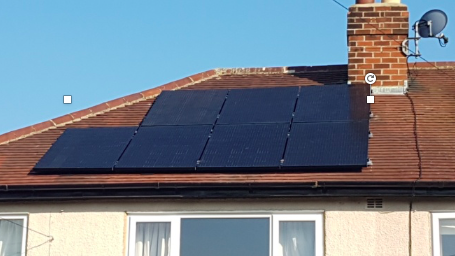 We had thought about Solar panels ever since they first came on the scene, as our home does not have a gas supply. But the cost was well beyond our pockets. What with the mortgage, the financial outlay, it was well out of our reach. 10 years ago solar panels were expensive. We could have borrowed the cash but it did not make sense due to the high interest rates and the big drawback is that the banks do like you to pay it back.

Well it was two things that started us on this journey. No three things as I happened by chance to mention solar panels to Keith Pitcher who is in our parish and a member of the Climate Action Ilkley group he’s a fount of knowledge and gives great encouragement to have them fitted. The second (being a Yorkshire lad) was the money, it was sitting in the bank doing nothing, no interest to speak of (even less now), just waiting for that rainy day that may never come. Third was when the Tree of Life was mentioned at Mass and Children’s’- Liturgy – what can we do to save the planet – the enthusiasm of the children made me think should I do something. If so, what could I do?.

After a chat with Keith and looking at the literature Keith sent me from Climate Action Ilkley,

the penny dropped or should I say pennies, for an investment of between three to six thousand pounds I could be saving a possible three to four hundred pounds a year. A lot more than the miserly interest I was getting at the bank for the same amount of cash.

As for the time it takes for the system to pay back what you’ve spent, that did not interest me, OK it is a plus that it will pay for its self in time, but you don’t buy a car thinking it will pay for its self in fact quite the opposite, you purchase something because you want it. In my case to make my Yorkshire pounds work for me, to do my bit to help the planet, and help my children’s and grandchildren’s futures better.

Working on recommendations I had three companies to look at. The first did not seem interested! the second provided a sky high quotation, the third said “who’s been sleeping in my bed” sorry wrong story (it’s nearly bed time). The third company came in with three realistic price options, each with an option to store electricity in a battery system. This reassured me that it was a possibility, even though our house is not ideal for solar panels as the roof is facing east/west and not the ideal south facing 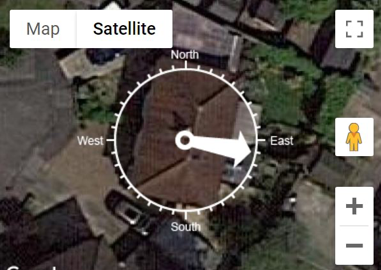 We quickly decided that battery storage was not an option due to the price, but thought the iBoost+ was a great idea. This device starts working when the electricity being produced is greater than what you are using. It diverts the spare electricity to the immersion heater in the hot water tank, once the tank is hot any spare electricity is exported to the grid.

The next step was a trip back in time as the loft was cleared for the house inspection to check the roof measurements, and to confirm it would take the weight. We found we could fit another two panels on the roof so we asked for another three price options.

So deposit was paid, the date for the installation was agreed then the world as we know it ends. A phone call asks can we come earlier as we have had visits cancelled, so the race begins to get the job done before the world shuts down. The lads arrived on the 25th of March and quickly had the panels fixed on the roof. 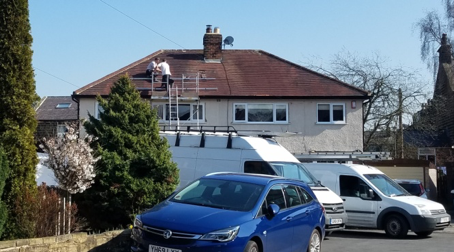 Then the hicc-ups started the inverter had not arrived (well it did but the delivery was before the office opened) and then the scaffold company that was needed to get on to the rear roof went in to isolation.

Social distancing was the order of the day it was very strange not making cups of tea or chatting to the lads (maybe that was a blessing for them) but the day went well and they returned on the 31st with the inverter to get us connected.

So what did they do apart from the obvious panels on the roof? Well the panels are connected to an inverter, this converts the direct current produced by the panels to alternating current. This provides electricity to the house with any surplus exported to the local grid. The iBoost+ (fitted in the airing cupboard) automatically connects the electricity from the panels to heat the water tank, this is operated by a small Wi Fi clip on the meter power supply cable next to the meter. 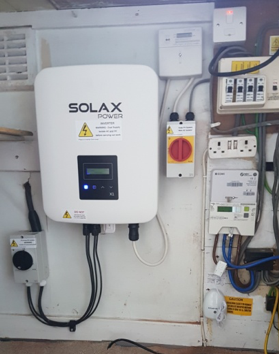 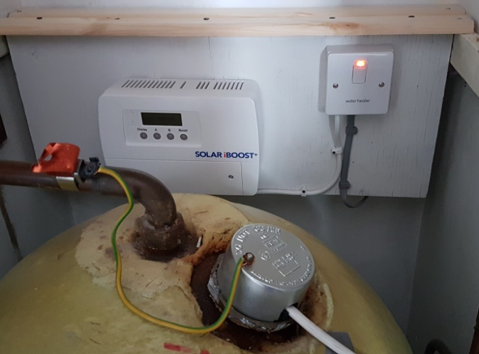 The best bit is the iBoost+ Buddy its display tells you when the water is being heated and when the panels are not generating electricity. 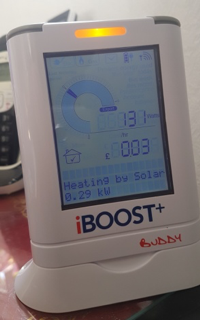 Orange = The hot water is being heated, or electricity being used is coming from the grid and the panels 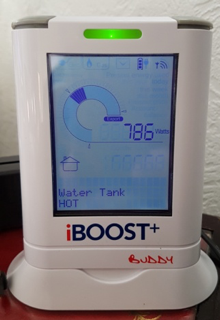 Green = Water is hot and electricity is being exported, 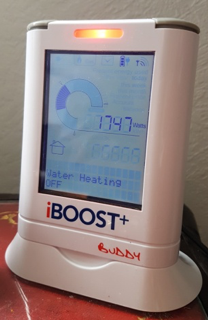 Red = More or all the electricity is coming from the grid

The big plus is as soon as the Buddy goes into the green we start cooking, get the washing, start ironing or do any job that uses a lot of electricity.

So where are we now after 19 days (at the time of writing), well we are waiting to get back to normal living and the rear roof panels fitted, should be a quick job as all the connections have been done. I am amazed how well the panels work even though there are none facing east, the system starts working at around six am so long as it is bright. The graph below shows a day with no clouds, and on a morning the panels keep electricity usage from the grid very low. It also shows clearly when the sun moves round to the west (house front) and the dip when the chimney shadow travels across the panels. So until the rear roof is completed, on sunny or bright days we try to use anything that needs a lot of electricity in the afternoon other than the kettle for our morning cuppa. 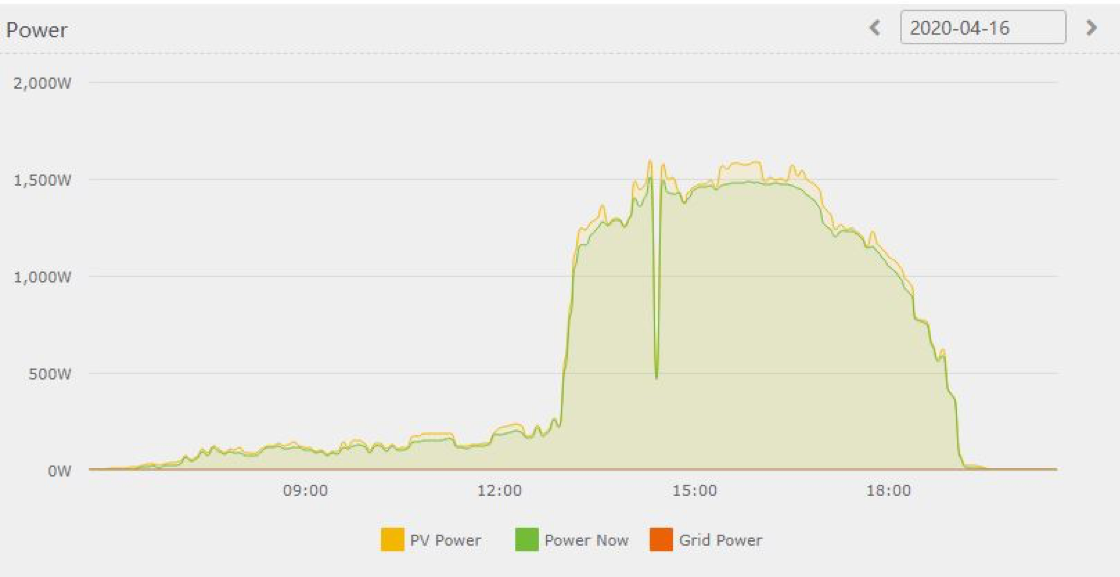 To date after 19 days with good weather and half a system our electricity costs have dropped from the average last year of £2.30 per day to £1.50 per day on electricity used and that is with a price increase this month, along with a saving of £4.38 heating the hot water and a grand total of 14kWh exported to the grid that will earn us the magnificent sum of 75p.

So is it worth it,

we think so, if you have money sat in the bank earning nothing,

It is really good for our environment as well as an example of how to invest in local, sustainable projects

(rather than letting banks use the money unwisely, remember the financial crash! which was a cost to us all)

And to finish what makes this Yorkshire lad smile 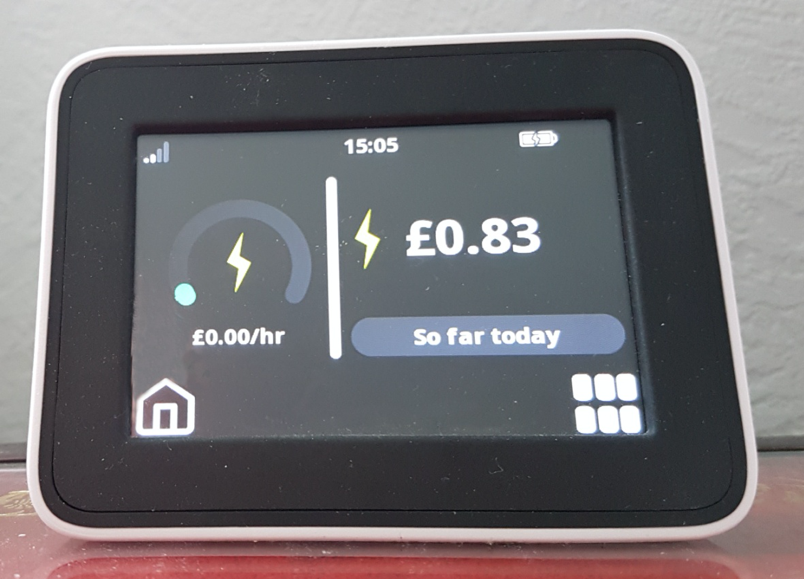 There will be an additional Mass on Wednesday 29th June at 7:30pm for the feast of St Peter and St Paul. On Thursday 30th June there will be a requiem Mass at 10:30am for Mrs Bernadette Swale.