In post-reformation times, there were very small numbers of recusant Catholics in the village of Burley-in-Wharfedale. In fact, in 1614, there were only five. The intermittent but punitive fines imposed on the Catholic gentry prevented a general resurgence of Catholicism in the North of England, despite the efforts of the seminary priests, Jesuits and Benedictines. However in the 1700s, a Benedictine mission at Myddelton Lodge in nearby Ilkley became a local centre of growth. In 1791, the position was improved by the Relief Act, and the Emancipation Act of 1829 finally gave Roman Catholics full recognition under the law. Numbers in England then increased both as a result of these legal changes and increasing immigration from Ireland.

By the early 1900s, the problem became one of providing sufficient numbers of churches and priests to cater for the increasing numbers of Catholic faithful. A single church in nearby Otley served an area of 90 square miles, including not only many separate towns and villages, but also three major hospitals that were established in the area to take advantage of the healthy rural air.

In 1930, a separate parish for Burley-in-Wharfedale and Menston was proposed, and the land for a church and house was bought. The bulk of the funding came from a retired civil servant living in Burley, a Mr. Frederick Le Fevre. The new church was consecrated in 1932, the first Parish priest being the selfsame but recently-ordained Frederick, now Father Le Fevre. It was the first church in England to be dedicated to the martyrs Thomas More and John Fisher, who were canonised three years later. The Parish Hall was added in 1936.  A yearbook from 1938 can be found here: Yearbook 1938

By the 1980s, SS John Fisher and Thomas More had become a thriving centre of worship for the Catholic population of the district. Not surprisingly, it was showing the effects of this usage and the general passage of time. In the late ’80s, a major restoration was carried out. Much of the fabric was renewed, a new foyer and passageway to the hall were added, and the layout was rearranged to cater for the liturgical requirements of Vatican Council II. The church and new altar were consecrated in October 1989.

Over the years the parish has been served by a number of assistant priests including Patrick Roche (who served under Fr Le Fevre); Francis Blanchfield (1952-1955); Edward Horkin (1955-1960) and John MacMahon (1984-1987). In addition, Fr V.L.Chacko (“your little brother”) from Kusudia in India assisted for periods whilst Fr Barrie Holmes was at this parish. For many years the parish was served by Rev. Patrick Kenny who was ordained a deacon on 7th December 1978.

In the 21st Century, the Church continues to serve the local population in Burley-in-Wharfedale and Menston, and continues to change to meet our needs for worship and companionship. Bishop Marcus blessed our new electronic organ during his visit to the parish over the weekend of 25 February 2018. All of our organists have enjoyed playing the new instrument very much!  Here is John and Stella. 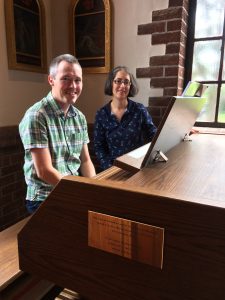 On Friday 8th March 2018 we celebrated Women’s World Day of Prayer. More details of WWDP can be found here. With great sadness I have to let you know that Fr Barrie Holmes died in St Gemma’s Hospice on the evening of Friday 19th November. He was our Parish Priest for some very special years. It was he who re-ordered our lovely Church, and help make it the lovely place / centre we all love. […]

Pope Francis’ on Thought for the Day for climate change

Dear BBC listeners, Good Morning. “Climate change and the Covid-19 pandemic have exposed our deep vulnerability and raised numerous doubts and concerns about our economic systems and the way we organise our societies. “We have lost our sense of security and are experiencing a sense of powerlessness and loss of control over our lives. “We […]

We have built a bug hotel from an old wooden pallet, a milk crate and some unused fencing panels.  We gave it a new roof and covered it with roofing felt to make it last a long time.  It is in place and now open for visitors!  Our children will be filling it soon with […]

Jack and his grandad John have teamed up to build an amazing hedgehog hotel for their holiday project. Jack cut the tunnel and legs to size, he then drilled, glued and screwed the box and tunnel together leaving grandad to cover the box and fit the lid.  The hotel is now in the Parish garden […]

Under the Gaze of God

Fr David Williams C.P. (who lives in Otley) has written a book which may be of interest to our parishioners.  It is available from Amazon books.

Fr Michael – “A Golden Priest” We at SS John Fisher and Thomas More are one of the lucky ones. We have the privilege and joy of celebrating a priest’s Golden Jubilee. Congratulations Fr Michael! Fr Michael as an altar boy at St Patrick’s,            Fr Michael at his Ordination Mass […]